From XBMC4Xbox
Jump to navigation Jump to search

EventServer is the part of XBMC that accepts remote device input on all platforms except the original Xbox. EventServer API is used to program event clients and simplifies interfacing input devices with XBMC. EventServer accepts commands from event clients such as LIRC, joysticks, PDAs, and iPhones.

The Purpose of EventServer API in XBMC

The EventServer in XBMC was created to satisfy a need to support many input devices across multiple hardware platforms. Adding direct support for a multitude of devices generally decreases performance and stability, and becomes difficult to maintain. The EventServer was created to provide a simple, reliable way to communicate with and control XBMC.

Event Clients and the EventServer

EventServer can be compared to the older web control interface, Web Server HTTP API (also known as "HTTPAPI"). Below are pros and cons of the EventServer system, compared to HTTP-API. 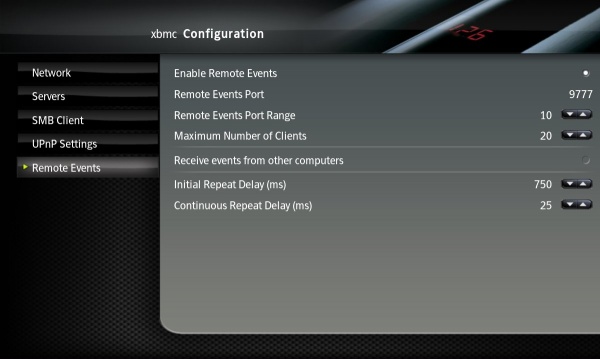 Receive events from other computers
Check to listen on the network, not just on the local machine.

The event clients and EventServer are under heavy development, so for up-to-date information please refer to the readme file

Most event clients can be configured using CLI. Common CLI arguments are address and port number. The defaults are localhost and port 9777.

Event clients can currently be recognized as one of the following:

Joysticks are mappable in keymap.xml using the following convention:

See Editing keymap.xml for more information on how to customize the keymap.

There is initial support for the PS3 controller (sixaxis) and

There is initial support for the PS3 Blu-Ray remote. The remote needs to be paired using one of two python scripts. 'ps3_remote.py' can be run as a user, but the controller must be paired every time the script is run. 'ps3d.py' will remember remotes between run-instances if it is executed as root, and it supports the PS3 Sixaxis controller as well.

Pairing with the PS3 controller is not yet handled automatically, but it can be done using the program 'sixaxis.c' available from [1].

Once paired, disable any existing HID servers that might currently be running and run 'ps3d.py' as root. The program requires root privileges because it listens on Bluetooth L2CAP PSMs 17 and 19.

Currently, all that is supported with the Sixaxis controller is emulating the mouse behavior. Hold down the PS button and wave the controller to move the mouse cursor in XBMC. Tilt it from left to right (along your Z axis) to control horizontal motion. Tilt it towards or away from you to move it vertically.

You should see xbmc recognize the WiiRemote. You can press the power button on the WiiRemote to save battery. To reconnect press the 1 and 2 again. As long as you leave the terminal window with xbmc-wiiremote open you will be able to do this, even if you exit/open xbmc.

The executable depends on libcwiid and libbluetooth and is compiled using

The WiiRemote will emulate the mouse by default, this can be disabled by passing --disable-mouseemulation on the command line.

The sensitivity of the mouse emulation can be set using the --deadzone_x or --deadzone_y, followed by the percentage of the space to consider "dead." A higher numberm eans higher sensitivity.

Other commands can be listed with --help

The WiiRemote can be mapped in keymap.xml with the following button IDs:

The name is by default WiiRemote, but this can be changed with the --joystick-name argument.

There is a nice guide on installing a Wii remote on XBMC-Live 9.11 here.

The J2ME client requires the following:

For compiling the Java application, see Clients/J2ME and Client/README (precompiled versions exists in our forum).

The Client can be mapped in the same manner as the PS3 controller in keymap.xml, but with the name J2ME:

All clients are able to talk to any server on any OS, but the client software is often OS specific.