by dispunko
I found it!

by Sassokee
I had a few issues with the mod, the first being one of the boxes in the main menu (Bottom right) doesn't align with the one above. The second issue is the wallpaper selecrion on the side menu, the first few wallpapers cannot be selected. I did a fresh install of the original skin a couple of times, still getting the same.

by dologopolich
It's been long since XBMC should have hired somebody to fix the UI and design in general. I would enjoy working with something that looks like something from the works of these guys creative design studio

xbmc4you wrote: ↑
Fri Mar 02, 2018 10:05 am
The idea is very nice, however it doesn't work for me.
I followed the instructions at the original "origins" thread and then the instructions overe here.
It looks nice, until you enter game browser and then it looks like this:
https://i.imgur.com/vNUV2xK.jpg
And the options sideblade doesn't have any text.
Wtf?
What am I doing wrong?

I have the same problem. Did you solve it? I cannot for the life of me decode your last.

Have you solved your problem?
if not, I have the solution, I want to help you

If not the shortcut 27 in the games tab now works?
Because in version 1.0.0 it was impossible to configure

The shortcut not working was because of a simple xml coding error. Dom had an awesome start to a skin with origins but it has lots of bugs unfortunately.

If I remember right it was a ! In the line of code that wasn't supposed to be there. It's been forever since I looked at it though.

by rarepandas
Been reading up on all these threads for about a year and learned a lot from everyone. I'm just stuck on how to create custom tiles on the xbosh dashboard. instead of "sign out" I just want Coin ops to be a shortcut there instead and with my own custom image for it. Can anyone help. It would be greatly appreciated

by kingherb
To Fix shortcut 27 in favorites just go to /skin/XBMC Origins/720p/ and find the Home.xml, open it in notepad wordpad or notepad++ and find and replace the following line:

by mubarkalajmi
Hello Guys!!!
I've been trying to use Origins, but I am not familiar with how it works. I need some one to help me to configure it. If anyone is willing to help me, please contact me through my email. I am ready to pay $$ for any help. 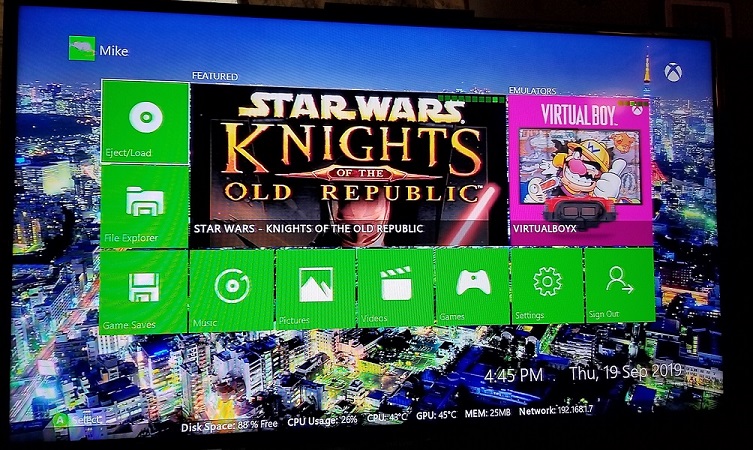 Snapped a pic of my TV, looks nice and slick!
Picked up an old Xbox at the goodwill recently, wanted a way to play old Xbox games and a have a nice user interface. This works perfect.

by jerk
Hi guys first of all I want to congratulate you for tremendous skin. A few days ago I installed it to test it and I am still confused with part of its content ... when using it, more questions and opinions are coming out for its best. I am currently working with the translation of the interface language in Mexican Spanish.

- I have doubts about how to improve the skin since the applications that I have installed such as evox, unleashed x, dvd2xbox, etc., do not display the icons that they already bring by default but in the XBCM 3.5.3 and other dashboards you can see but with This skin can not.

- I read that you can modify the home dash board and although for me it is perfect as many images and video entries really do not occupy them, there is a way to replace them with an entry for applications since this is what I see I do not have Hard access as such.

- Speaking of the same point before these applications I can run the games section here is where I noticed something very important because right here my applications appear (eye I have them in E and in the app folder). I understand that the skin is self-customizable but I think that most users try the skin first and then start customizing it according to their taste, but as I see the apps in this section I get an simulation of xbox covers as they have no image It is hard to identify what you open and only in the upper right corner it shows you the amounts that are in folders and only shows you the letters of the partition unit where it is located but in what you customize it costs a lot of work to know that each cover belongs to. I don't know if the name of the file in question could be added without having a cover image.

Thank you in advance for your work and I know this is open to near improvements.
All times are UTC+01:00
Page 2 of 2